Gulfport (UK) Gulfport) is a city in Harrison County, Mississippi, the United States of America, and is the second largest population in the state after the state capital Jackson. It is the largest city in the Gulfport-Biloxi metropolitan area and also the integrated urban area of Gulfport-Biloxi-Pascagura. The population in the 2010 population census was 67,793, 4.7% less than 71,127 in 2000. Along with Biloxi, it is the location of the Common County Office in Harrison County. It is also the East Coast Base of the U.S. Navy Seaby.

On August 29, 2005, Hurricane Katrina's forces crossed the east side, and most of the town of Gulfport was destroyed by the flood. Hurricane Camille on August 17, 1969 also suffered heavy losses.

The Gulfport has a Gulfport-Biloxi International Airport, which is shared with Bilox City. The airport was also badly damaged by Hurricane Katrina. A major repair project was under way, most of which were completed and the commercial route was resumed. New air routes are always being added. 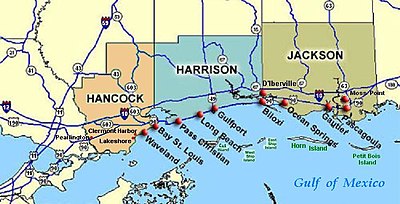 The following is demographic data from the 2000 census.

The education in Gulfport City is run by the Gulfport school district and the Harrison District school district. The city has a private baptist called William Carey University. Jefferson Davis Campus of Mississippi Gulfcoast Community College is also in the city.

The San Herald local paper is published in Gulfport. There are two TV stations, WLOX of ABC series and WXXV of FOX series, and a digital station of My Network TV series. There are seven radio stations.

Gulfport, Biloxi and the Gulf of Mexico have access to Gulfport Biloxi International Airport.

On August 29, 2005, Hurricane Katrina struck Gulfport on the east side, where the forces were strong. The storm and location that continued for more than 16 hours caused the storm to flood most of the town in the course of a day, which was over 28 feet high.

The hurricane damaged more than 40 libraries in Mississippi, and in the case of the Gulfport Public Library, it had no choice but to break one, break two windows and repair them.

The Sun Herald won the 2006 Pulitzer Prize for the coverage of Hurricane Katrina under editor Stanley R. Turner.